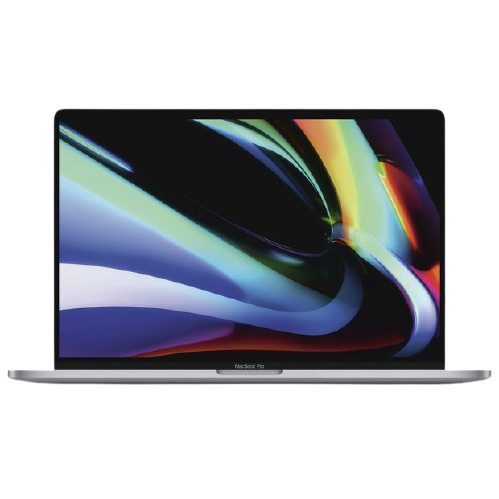 The best for the brightest.

Designed for those who defy limits and change the world, the 16-inch MacBook Pro is by far the most powerful notebook ever made. With an immersive Retina display, superfast processors, advanced graphics, the largest battery capacity ever in a MacBook Pro, Magic Keyboard, and massive storage, it’s the ultimate pro notebook for the ultimate user.

A big, beautiful workspace. For doing big, beautiful work. MacBook Pro features a stunning 16-inch Retina display — the largest Retina display ever in a Mac notebook. It produces 500 nits of brightness for spectacular highlights and bright whites, while delivering deep blacks thanks to the precise photo alignment of liquid crystal molecules. And the P3 wide color gamut enables brilliant, true-to-life images and video. So no matter where you are, you’ll see your work in the best possible light.

Processor and Memory – Working at the speed of thought.

The 16-inch MacBook Pro brings a whole new class of performance to the notebook. Thanks to a more advanced thermal design, the Intel Core i9 processor with up to 8 cores and 16 threads of processing power sustains higher performance for longer periods of time — and delivers up to 2.1 times the performance of a quad-core MacBook Pro. So whether you’re layering dozens of tracks and effects, rendering 3D models, or compiling and testing code, you’ll be doing it in no time flat.

The AMD Radeon Pro 5000M series delivers the most graphics horsepower ever in a MacBook Pro. The 16-inch MacBook Pro base model is over two times faster than the previous-generation base model, for seamless playback and faster rendering of ultra-high-definition video.

For working on graphics-intensive projects like 3D rendering or high-end game development, you can supercharge your MacBook Pro with the optional Radeon Pro 5600M. With its 40 compute units and 8GB of High Bandwidth Memory, this powerhouse GPU brings a new level of desktop-class graphics power to MacBook Pro.

Storage – Bring your whole studio with you.

The 16-inch MacBook Pro has up to 1TB of SSD storage — the most available in any notebook. So you can take your photo or video libraries with you no matter where you’re headed. And with superfast speeds, massive files load in an instant and pro apps launch in a blink.

Only logged in customers who have purchased this product may leave a review.